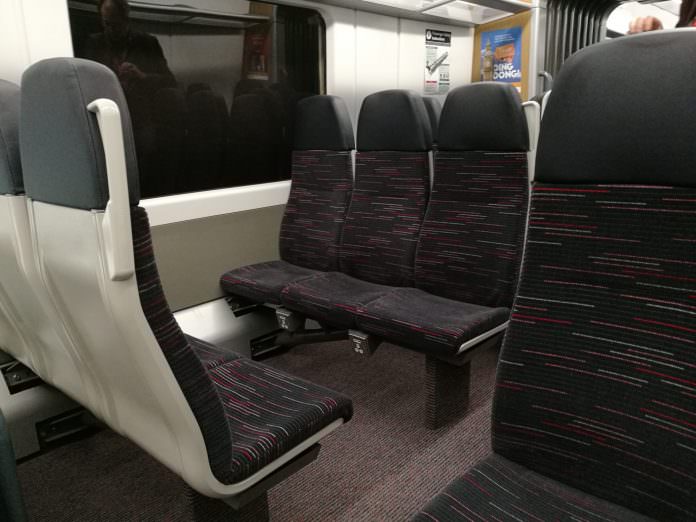 As part of its winning bid for the East Anglia franchise, the TOC committed to the ambitious £1.4 billion programme of replacing its entire fleet of trains by buying 378 Stadler carriages and 665 Bombardier carriages.

Earlier in the year GA gave an insight into how the Stadler Flirt trains will look and now, as it nears to the end of the design stage, it has revealed what to expect of the Bombardier Aventras.

Capacity is key for the new trains and this is reflected in the design throughout.

The saloon is not however a replica of what the Class 720 Aventras will look like because it brings together key features such as a toilet, dense seating and wheelchair spaces into one area.

There is no first class section, a 3×2 seating formation has been adopted – though there will also be 2×2 seating – and there are a limited number of tables as seat-back tables are preferred because of a growing trend of tablet users.

Instead of body-side heaters encroaching on leg room, under-floor heating has been used, seats are cantilevered too to save on space and there will be no doors separating vehicles.

The design stage is expected to close in November 2017.

The 665 Aventra carriages are due to enter service from 2019 forming 89 five-car and 22 ten-car configurations.

The trains will run between London Liverpool Street and Essex, Hertfordshire, Cambridgeshire and Ipswich.

They will serve key commuter towns along the West Anglia route, including Harlow, Hertford, Bishops Stortford and Cambridge, the Great Eastern Main Line, including Chelmsford, Witham, Braintree, Colchester, Clacton and Harwich, and the line to Southend Victoria.

They will also supplement the Norwich to Liverpool Street Intercity service with a third train an hour between Norwich and London.

Greater Anglia is a joint venture by Abellio, international arm of the state-owned Dutch national rail operator NS, and the Japanese firm Mitsui.