The order was approved by SNCF Mobility’s board of directors last month and confirmed by Alstom earlier today (March 10).

The new units, part of an order for 40 TGV Océane trains signed in 2013, will be delivered between 2019 and 2020 for services between Paris and Bordeaux. Twelve trains have already been delivered and four are already in service.

The order is connected to an investment package announced in October 2016 to protect the future of Alstom’s Belfort factory.

As well as committing to new rolling stock, Alstom is in the process of diversifying the site’s core activities to focus more on TGV maintenance.

Jean-Baptiste Eyméoud, chief executive of Alstom France, said: “This is very good news for our French sites, especially Belfort and La Rochelle, as well as for our component sites. This new train has many advantages for the railway operator, particularly its large capacity.

“Initial feedback, from passengers on this new train, is highly positive, in terms of both its comfort and its looks.”

In February, the state, SNCF Réseau and Alstom signed a financing deal to electrify the Belfort’s test track. It was also announced that Akiem, a leasing company which is jointly owned by SNCF and Deutsch Asset Management, would use the Belfort site to maintain 23 of its locomotives. 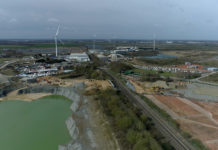