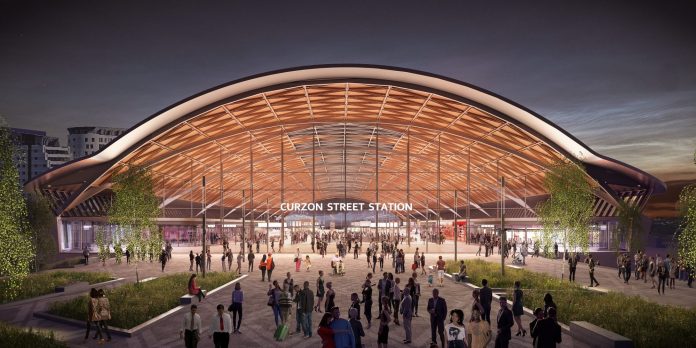 HS2 has released concept images of two of its brand new stations: Curzon Street in Birmingham and Interchange in Solihull.

Curzon Street station will be the first new intercity station built in Britain since the 19th century.

Opening with seven high-speed platforms in 2026, the station will not only be for high speed rail passengers, it will be a brand new public space in Birmingham city centre. It will be integrated into an extended tram network, as well as offering cycle, taxi, bus and conventional rail connections to the rest of the city and the wider West Midlands.

Carol Stitchman, WSP design manager for Curzon Street said: “Our design recognises the station’s function as a place of arrival and connection. It is the only HS2 station that welcomes you with a view of the city, where you can see the city from the train, and the train from the city.”

Neven Sidor, Grimshaws’ lead architect for Curzon Street station, added: “The elegant sleek low arch which will make the station instantly recognisable in the surrounding area and its warm coffered soffit will join the growing list of modern Birmingham icons.

“The West concourse will have the ambiance of a modern airport terminal with both platform and waiting areas included in the grand arched space. The East concourse has been designed to include the historic Curzon Station building as part of a revitalised New Canal Street scene.”

Interchange station will be a new major gateway station for the region and part of a new public transport interchange serving Solihull, the West Midlands, Birmingham Airport and the National Exhibition Centre. The station will help deliver longer term development and growth proposals for the area around the station, including new homes, business space and jobs.

Kim Quazi, Arup lead architect for Interchange station, said: “The station roof has been designed to fit in with the surrounding landscape, and to optimise natural daylight using an integrated, efficient structural form and rainwater management system.

“We have also focused on a number of objectives including creating a positive experience for future users and rail passengers by including open space, parkland and views to green spaces, and constructing a green building with low energy consumption and low maintenance.”

HS2 CEO Mark Thurston said: “Both of these new stations will be transformational for the Midlands and will create opportunities for regeneration, growth and economic benefits for the city and region.

“Preparatory work for the stations is well under way, with a variety of enabling works including the construction of access roads and archaeological investigations.” 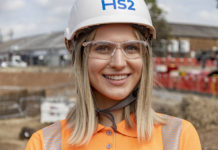 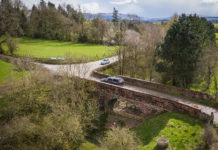