The first test run has been completed between Jeddah and Mecca on Saudi Arabia’s Haramain high-speed railway.

The milestone, which was announced on the Saudi Railway Company’s website, is a major step forward towards the opening of the new high-speed desert railway.

Passengers on board the trial service included the chief executive of the Saudi Railway Company (SAR), Dr Bashar bin Khaled Al Malik, and representatives from the Spanish consortium building the line.

Around 60 million passengers are expected to use the new high-speed railway, which is scheduled to be completed by the end of 2017, each year.

Talgo is supplying 35 high-speed trains for the line. The company announced in June that the train had exceeded 300 km/h in testing for the first time.

One of the biggest challenges will be maintaining a high fleet availability given the challenging desert conditions the trains will be operating in.

Talgo has fitted the trains with what it calls a “desert pack” to stop the ingress of sand and allow it to withstand temperatures above 50 degrees Celsius.

The 450km railway will have five stations connecting Mecca with Medina, via Jeddah, King Abdulaziz International Airport and the King Abdullah Economic City. The station in Mecca is located outside of the city centre in Mecca’s Rusayfah district. 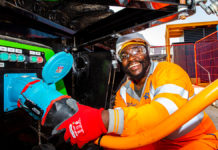